Someone once asked, "this is Christmas, and what have you done?" The answer each year, as you might expect, was "played more games." This year was no different, and to celebrate in style for the last gaming session of 2014 (a fantastic year for gaming which we will look at before the year is out), the Knaves did the big Christmas gaming night last Thursday. Coffee, sugar, and lots more sugar, but we are here to talk about the games. Naturally when you put 10 people into a 6 person space, the group tends to migrate in different directions, and so while some of us may have separated out and began the night with some gambling on a camel race (more on that in said 2014 segment), we completed the evening with a classic of the modern age of gaming that is suitable for both newbies and vets alike; Lords of Waterdeep.

Lords of Waterdeep is set in the Forgotten Realms world of Dungeons and Dragons. We all play as lords that make up the government of the city-state of Waterdeep. During the game we are trying to gather adventurers to our side to set out and complete certain tasks and quests of interest for us. The game runs off of simple worker placement mechanics, but is set apart by a unique intrigue system that is used to get an edge over your opponent(s). Every player starts with a number of agents which they use to gather adventurers in their tavern in the hopes of completing a number of quest cards on their board, which range from 'churchly' matters of Piety to the debauchery and deviousness of Skullduggery. Normally completion will award victory points and sometimes some other rewards. Some of these quests also reveal a plot which benefits the player throughout the game (this usually revolves around trying to complete a number of the same type of quests or getting bonuses for gathering certain types of adventurers). As is probably no surprise, whoever has the most points at the end of the game's 8 rounds wins. 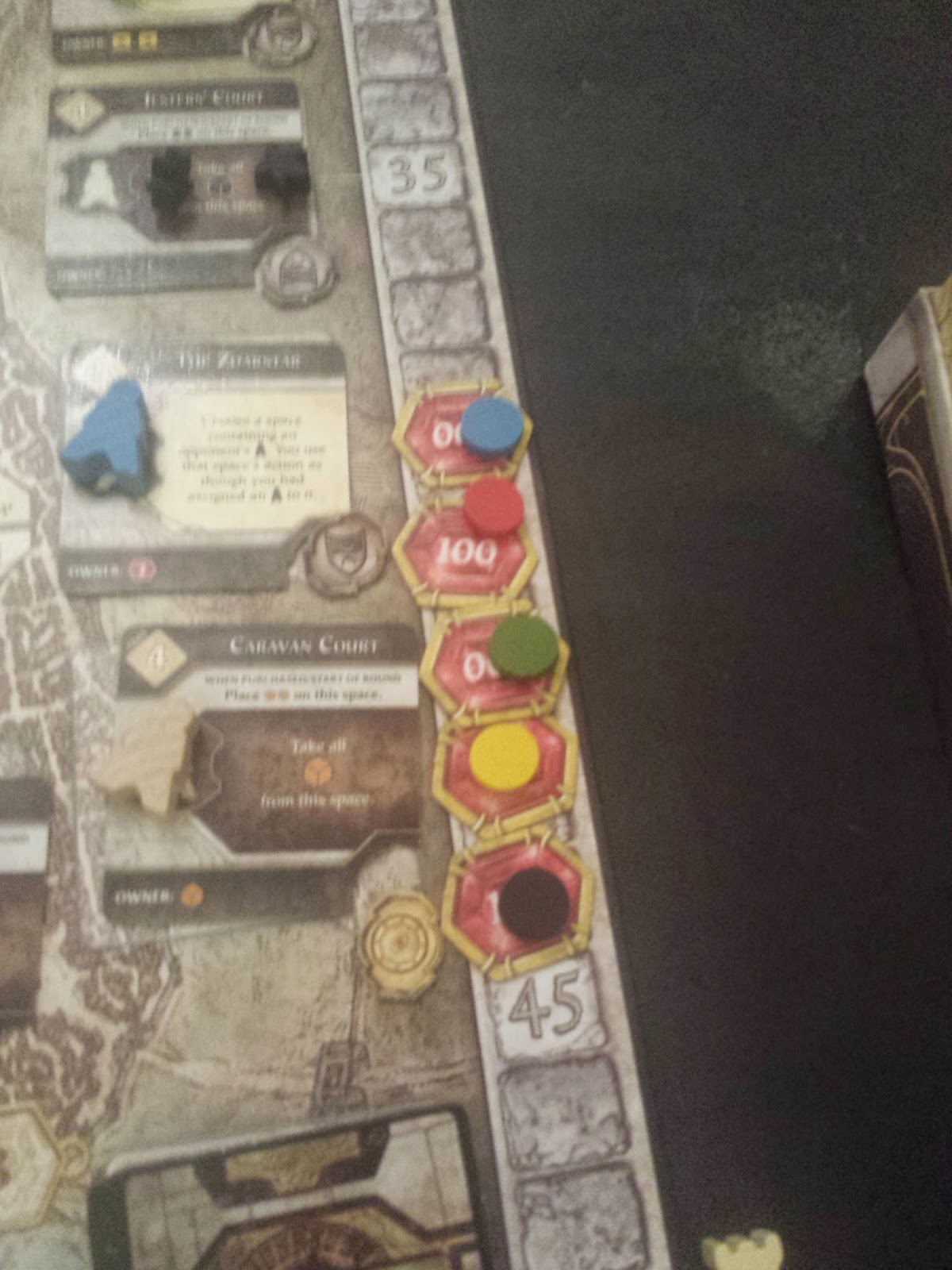 Another unique side to Lords of Waterdeep that sets it apart from the likes of Agricola or Puerto Rico however is the inclusion of the fabled Lords of Waterdeep themselves. Anyone privy to the world of Dungeons and Dragons knows that these lords and ladies run the city, and use magical masks to keep their identities secret. The game plays into that by assigning one of these figures to each player in secret at the start of the game. Each has their own objective that will earn them bonus points at the end, so no two players are ever trying for the exact same thing. Because of this mechanic the game really is never over until it is over, a sign, in my opinion, of a very well made game. Our game Thursday night was no different as despite some very clear early leads from two players, the end board shown to your right tells a very different story.

Lords of Waterdeep is a very simple game but no less fun or tactical for that matter. As I mentioned earlier, it is great for both new and experienced players alike, and in my opinion, is one of the shining examples of what board gaming is all about over the last few years. I daresay it might be my favourite game of recent times, and I gave it 10/10 on Board Game Geek. The game was also featured on TableTop, so if you would like to see it in action, just take a look at the video below.

Please leave a comment with your answer, and tune in next time. You've been Tabled!